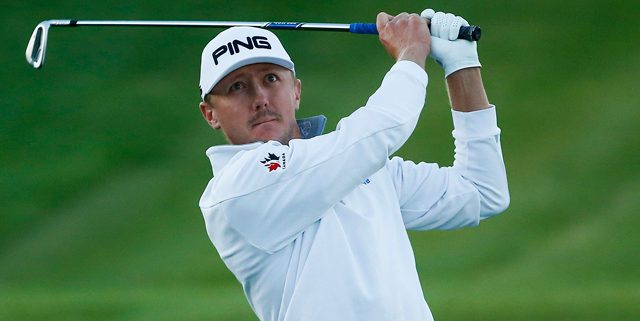 The RSM Classic playoff which was extended to Monday after the game was stopped due to bad light. Four players: Mackenzie Hughes, Henrik Norlander, Camilo Villegas and Blayne Barber.

The game ended Monday morning with Mackenzie Hughes clinching the RSM Classic title after holing an 18-foot par putt at the par3 17th. The 25 year old Canadian is the first rookie in twenty years to go wire to wire for his first PGA tour win, the first one being Tim Herron at the 1996 Honda Classic.

“If I don’t make that putt I’m probably done,” said Hughes. “But I tried to flip that around and say, ‘everyone’s got work left for par, but if I could put mine in first it makes everyone’s job harder. As soon as I hit it I knew it was on a good line. I gave it some pace because I knew if I didn’t make it I’d probably be out. About a foot from the hole I knew it was right in the heart and that was such a good feeling to see it go in.

Hughes takes home a handsome paycheque of $1,080,000 and he now ranks fourth in the FedEx Cup ranking. But most importantly, he is now in the Masters.

Hughes was a part of a five-man playoff, which became a four-man playoff after Billy Horschel was eliminated on the first playoff hole on Sunday. The remaining four players all halved the 2nd playoff hole when the game was stopped to continue Monday morning due to poor light.

The Canadian player from Dundas, Ontario put up an amazing performance on Monday morning closing with a 69 to finish with a 17-under par 265. This is his first PGA tour win since he began playing competitively.