Try this as you tee up for your next game! 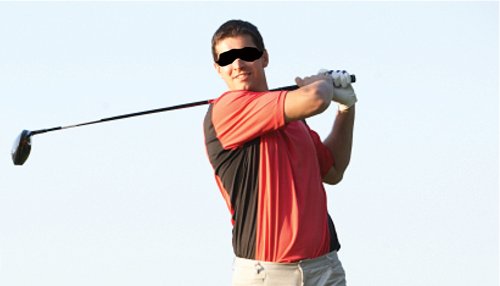 Try this as you tee up for your next game!

Put on a blindfold and then get your partner to line you up and then see how you do!

You might think of golf as an activity that needs eyesight, but that’s not necessarily the case. The game is enjoyed, and played well, by many people throughout the world who have someone else being their eyes.

The earliest record of blind golf is from the 1920s in the USA when Clint Russell of Duluth, Minnesota, lost his sight when a tire exploded in his face. He began playing blind golf in 1925, gradually increasing his scores until Clint managed to shoot an 84 for 18 holes in the early 1930s.

A match between two blind Englishmen and two Americans took place before the Second World War. Organized blind golf tournaments have taken place in America since the United States Blind Golf Association was established in 1947.

The first hole-in-one recorded by a blind or visually impaired golfer in a National Open was scored on September 15, 2004 by Jan Dinsdale, a B2 lady from Northern Ireland. It was on the 115 yard second hole at Shannon Lake Golf Club in Kelowna, British Columbia during the Canadian Open Tournament

Surprisingly we think, blind golf includes only minor modifications to the standard rules of golf.

The principle of playing is that blind or partially sighted golf players have a sighted coach who assists the golfer in describing distance, direction and characteristics of the hole, and helps with club head alignment behind the ball, prior to the stroke.

From this point, the golfer is on his own, and it is her/his skill that determines the resulting stroke. Other than the coach, there is only one relaxation to the standard rules: blind or partially sighted golfers are allowed to ground their club in a hazard.

So next time you take to the links… enjoy the vistas and play the game as others may not.

See our client testimonials and contact us today to book an unforgettable golf tour!