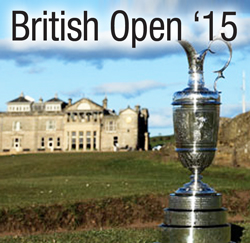 In July 2015 the 144th Open Championship returns to St Andrews in Scotland – the home of golf!

From 16-19 July it will be the 29th time that golf’s oldest Major has been played over the Old Course. at St Andrews.

South Africa’s Louis Oosthuizen won by seven shots with a 16-under par total of 272 when The Open was last held at St Andrews in 2010.
During the 28 Opens that have been held on this hallowed turf, St Andrews has often produced Champions who are the best of their generation.

Other memorable moments include Nicklaus waving an emotional farewell from the Swilcan Bridge in 2005 as he ended his remarkable career.

If you want to come and watch this special competition in a special place, and maybe play some of Scotland’s finest golf courses.

Check out our golf tour reviews and contact us today to book.