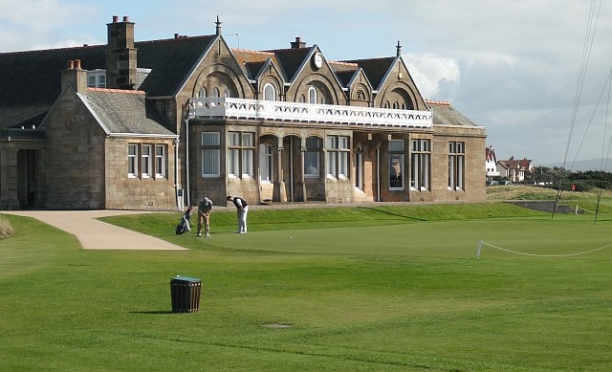 This is the final blog in the Scottish series in which we cover one club and then suggest a ‘Royal Club Tour’.

Royal Troon, founded in 1878 and granted Royal patronage by Elizabeth II on its centenary.

Troon is renowned as one of the greatest links courses and hosted its first Open Championship in 1923. It is a traditional out and back links course and on the front nine, the 8th, the world famous "postage stamp", is the shortest par 3 on the Open circuit at 123 yards.  After some gentle opening holes there follows a series of holes weaving up, round and through some of the most striking linksland to be found at any of the Open venues. The strength and direction of the wind becomes very important: if the wind is against the players on the back nine, it is a very tough finish.

Troon was granted its "Royal" designation in 1978, the last club in Great Britain to receive this award. There is nothing exceptional in Great Britain for a club to reach its 100th year. We have been unable so far to discover who put this forward to the Queen. It could have simply been the club but there is normally an intermediary. Prince Andrew, the second son of the Queen is a keen golfer and patron of many top golf clubs. He has frequently been at Royal Troon but he was born in 1960 and was therefore only 18 in the year of Troon’s centenary. Any further information on how this patronage was acquired would be appreciated.

We have selected 6 “Royal” golf courses from the 10 Scottish clubs in this series to provide a Royal Tour. Of the four omitted Perth, Mussleburgh and Burgess are now average parkland layouts. St Andrews is an enigma as the Royal and Ancient Golf Club is the only Royal Club that does not own a course. The main links are owned by the town. However this is just a technicality and it can easily be accommodated in the tour. Of the six clubs selected there are four high quality links and two hidden gems.

Your Day by Day Itinerary

Arrive at Glasgow or Edinburgh Airport, met by AGS Representative, collect auto or meet your private driver/guide, head north to Dornoch your base for 2 nights.

DAY 2. Play Royal Dornoch, 3rd oldest course in the world. The links are in a timeless setting that is wild, isolated and beautiful.

DAY 3. Drive to Banff for 2 nights. Play Duff House Royal and enjoy the design skills of Dr. Alister MacKenzie. His challenging two-tier greens were a forerunner to his work at Augusta National.

DAY 4. Play Royal Tarlair, a clifftop course with a famous par 3. You play 13o yards from an elevated tee over the sea to a green beyond a ravine.

DAY 5. Drive to Royal Aberdeen on route to Montrose for 2 nights. The club dates from 1780. Its front nine is regarded by many as the finest in the world.

DAY 6. Play Royal Montrose Medal course which is 4th oldest course in the world. It is a fine golf challenge and has a great history.

DAY 7. Drive to Troon for 1 night. Play Royal Troon, a fine Open Championship course. The world famous "postage stamp", is the shortest par 3 on the Open circuit at 123 yards.