Killarney Town - Golf and Sightseeing and in County Kerry 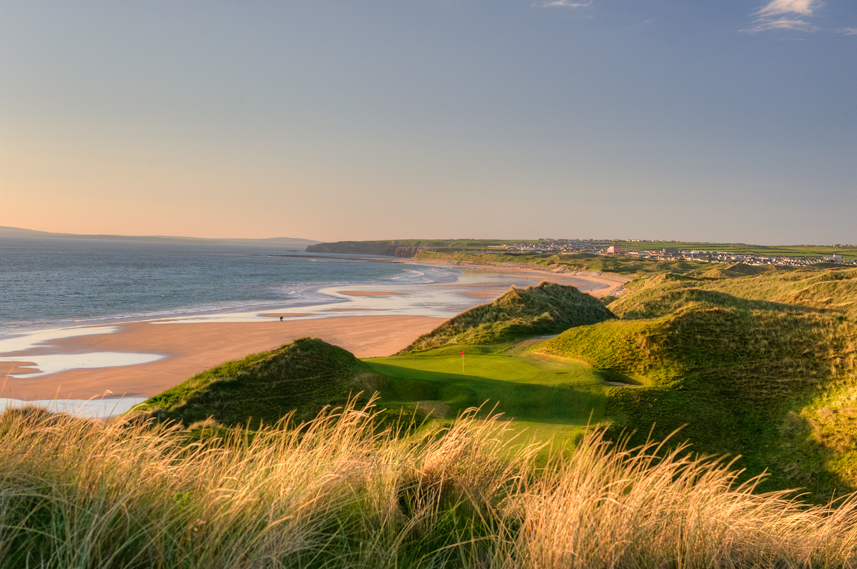 Killarney Town - Golf and Sightseeing and in County Kerry

Many golfers travelling to the South West arrive at Shannon Airport in County Clare. This is close to world ranked Lahinch Old golf course and Trump International at Doonbeg. Golf tours sometimes combine the best of county Clare and Kerry.

Ballybunion Old Course is rated amongst the best courses in the world. It is located on the north-west coast of County Kerry, on a beautiful stretch of daunting sand dunes overlooking the Atlantic Ocean. Each hole, every hazard and shot is defined by nature’s boundless presence. It is a thrilling challenge and a supreme test of golf. 6739 yards, Par 72

Ballybunion Cashen is built on the same terrain as the old course and is shorter. However it is full of charisma, oddities and remarkable holes. It is more testy, stunning, brutal and demanding than its older famous sibling, a thrilling links in its own right. 6290 yards Par72.

Waterville is high in the world rankings. It plays on a remote headland bordered by the Atlantic. There are no weak holes. The par threes are excellent and the par fives outstanding. The front nine is quite flat whereas the back nine winds through avenues of towering dunes. 7347 yards, Par 72

Tralee links –Tralee is a captivating course throughout and gets rave reviews. It is said that Arnold Palmer created the front nine and “Mother Nature did the rest. The front nine is fairly level links along the coast with stunning views from the cliffs across to the Atlantic. The back nine plays through towering dunes with huge carries across ravines to raised level greens. 6948 yards, Par 72

Dooks Golf Club is on the Ring of Kerry road and sits on three stretches of sand dunes at the head of Dingle Bay. The tight sandy fairways and well contoured greens offer a perception of traditional links golf at its very best. It offers a technical challenge for all golfers calling for creative shots at times.

Hogs Head is just outside the town of Waterville. It has beautiful mountain views and majestic cliff holes. The greens are large and contoured; the fairways are broad and undulating. With a firm sandy base it plays like a links especially with wind on the exposed headland. A huge shared green for the 11th and the 14th pays tribute to St. Andrews Old. 7145 yards, Par 72

Killarney Killeen – The setting of this course is spectacular with beautiful lakeside scenery. It must be one of the loveliest inland courses in Ireland. It is also challenging to players of all levels and has hosted the Irish Open 4 times. The holes are varied and this exciting course has numerous water hazards.  7600 yards, Par 72

A selection of Kerry Sightseeing

Killarney National Park is a major tourist attraction encompassing McGillycuddy Reeks Mountain Range which includes, Torc Waterfall, the dramatic Gap of Dunloe, the mountain pass Moll’s Gap and several woodlands.  At the foot of the splendid mountains are the three world famous Killarney Lakes; Upper, Muckross and Lough Leane. These features along with wildlife including the only herd of native red deer make the park unique. The town is within the park which adds Ross Castle and the 19th century mansion Muckross House.

The Ring of Kerry attracts tourists to Kerry all year round. A drive around this circular route enables you to stop and enjoy the sights of the Ring. These include beautiful beaches, ancient buildings, panoramic views, and dramatic mountains. Kenmare is a quirky town with many amenities, regional shopping, a Bronze Age stone circle, and fresh ocean fish.

Molly Gallivan’s 200 year old Cottage and farm is near Kenmare. It shows simple country lifestyle in rural Ireland before the days of modern conveniences. Visit the ghostly ruins of a family dwelling from the era of the Great Famine and a Neolithic Stone Row, part of an ancient sun calendar. Molly was a widow with seven children who struggled to survive the period of famine. Initially she supplemented the meagre farm income by selling the illegal “poitin” (whiskey). Later she set up a cottage industry selling hand spun woollens and local crafts.

The National Folk Theatre is at Tralee and presents Irish folklore through music, song and dance. There is a professional core group of full-time performers. They are supported by selected artists drawn from the local community, trained in the ‘Siamsa Tíre’ style and idiom. The aim of the Theatre is to safeguard, explore and develop traditional art forms in music, song and dance. It also provides training and education and develops new work.

Killorglin Puck Fair in Irish translates to Killorglin "Fair of the He-Goat" and is one of Ireland's oldest fairs. Its origins are lost in time. This street fair takes place on August 10th, 11th and 12th each year. They catch a wild goat from the mountains. Traditionally a young schoolgirl is "Queen of Puck" and crowns the goat "King Puck". The goat is placed in a cage on a high stand for three days. On the 3rd day he is crowned in the town square and the festivities can begin while the goat is led back to his home in the mountains. Each day Musical, Theatrical and Comedy Street Performances take place providing free entertainment. Veterinary supervision ensures good treatment for the goat.

Dingle Peninsula has been described as a “microcosm of Ireland”. It’s a rugged beautiful landscape with popular routes being Slea Head Drive and Conor Pass. It’s a huge open-air museum, rich in ancient history, and with over 2000 archaeological sites. Popular sites are Gallorus Oratory, Dunbeg Fort and Beehive huts.

Dingle town is famous for the dolphin that occupies its bay. It is unusual with old-world pubs, boutique shopping, great restaurants, rugged coastline, local artists, Dingle Distillery and Ocean World.