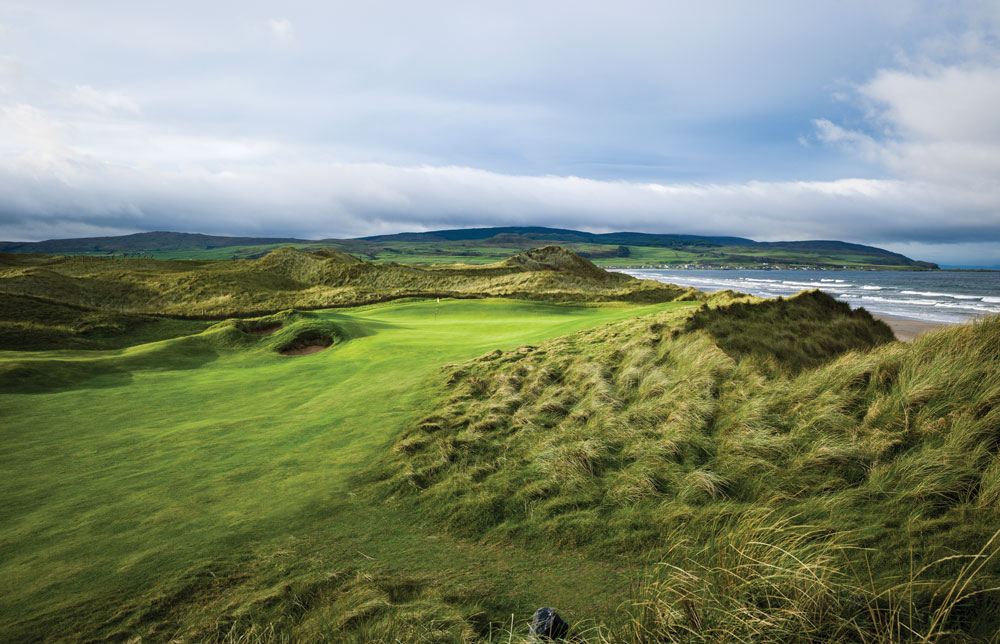 The Kintyre peninsula is a narrow stretch of land 40 miles long, going nowhere. The Gulf Stream runs the length of the west coast of the peninsula, so the climate is better and the water a lot warmer than normal in Scotland. The end of the peninsula is known as the Mull of Kintyre, immortalized in the song by Paul McCartney.

Dunaverty Rock was an age-old fortified site that once sheltered Robert the Bruce. Dunaverty Castle was built there and became infamous in 1647 when it was besieged by Clan supporters of Oliver Cromwell. It ended with the surrender of the 300 Clan MacDonald Royalist supporters who were subsequently massacred.

The Castle was later raised to the ground and little remains. Our hidden gems are in this area near to Campbeltown famous for cheese and for its Whisky Distilleries.

One of Scotland’s true ‘hidden gems’ and was designed by local members. It is found on the south coast of the stunning Mull of Kintyre peninsula in the beautiful village of Southend, just 13 miles from Ireland. Nearby the famous "St. Columba's Footsteps", etched in the rock for centuries, show where Christianity was first brought to Scotland from Ireland.

The Course is a traditional natural links golf course, laid out amongst the sandy seascape which links South Kintyre’s farmland to the sea and through which the Conieglen Burn flows and Dunaverty Rock towers above.

Whilst it’s not particularly long, high and low handicappers alike will enjoy its challenging layout with springy turf on undulating fairways and a fine set of greens. It’s a fun, natural links golf course which weaves amongst the wind-contoured terrain creating natural hazards on every hole. There are seven par 3’s, ranging from 123 to 245 yards, a tricky collection to be mastered to score well.

There are spectacular views over Sanda Island to the south, Ailsa Craig and Ayrshire to the east and Northern Ireland to the south-west. It is a wonderful coastal setting, has fantastic conditions and offers a memorable experience. 4799 yards, Par 66. High Season, 18 holes £28.

Gets off to a great start from the first tee. The carry from the tee is a teasing shot across the Atlantic, difficult to judge in a wind but the beach is in play so don’t panic. It is in the wonderful Machrihanish dunes near the small village of Machrihanish. The course is a joy to play, being more fun than long.

There are charming views across to the islands of Islay, Jura and Gigha. The dunes are majestic and the front nine is particularly good. Throughout the greens are firm and fast, either sunk in punchbowls or raised. There are blind tee shots, undulating rippling fairways and rugged dunes.

The layout is not a typical predictable nine out, and nine back. Each hole seems to flow seamlessly from the previous one, unlike many natural links courses. It is isolated and needs some effort to get to Machrihanish, but it is worth it. 6462 yards, Par 72. High Season, £65

A relatively new course. However, because it was built on a site of special scientific interest it has been created with the lightest touch possible. It claims to be the world’s most natural course. The course is on 259 acres but only seven acres were disturbed in constructing the golf course, for shaping the tees and greens.

The fairways are just as they were found, only mown shorter. The routing of the course follows the land. This means that you will have many blind shots, to both fairway and green and many greens are in natural bowls. Because irrigation and fertilisation is not used it has a natural and rugged appearance. It has been created essentially in the manner of early courses in the 19th century, a ‘step back in time’.

Playing at the dunes you can experience golf as in the early days. The fundamental nature of the game when it was simply a golfer against the elements, yourself, and against a wholly natural course that is never dull. The joy of the links golf game in its earliest and purest form.

The Dunes gives you an unusual chance to play golf shots you might never have considered playing before. Take up the challenge for a memorable experience. Championship 7082 yards, but from Yellow tees 5835 yards, Par 72. High Season, weekdays £65.