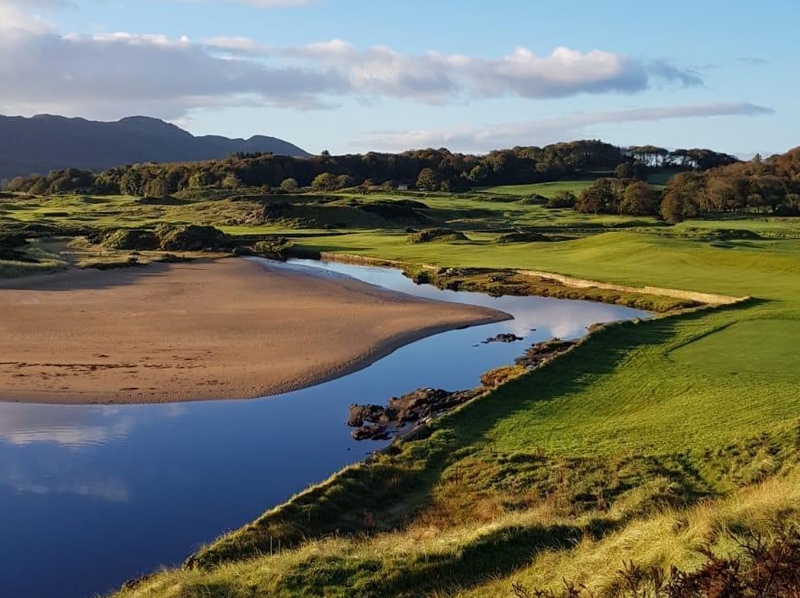 Summary Introduction to the Series

Many visitors to the UK and Ireland like to play seaside links golf courses. They may choose to add a “Hidden Gem” whether a links or not. To qualify we believe each gem should have many of the following qualities:

Hidden Gem Golf Courses in the North West of Ireland

Introduction
The North West of Ireland is essentially County Donegal. Its lengthy coastline has more true links golf courses than any other county in the Republic or Northern Ireland.

There are eleven true links courses with another soon to open. This article describes five of its gems. One other gem Narin and Portnoo has recently been under reconstruction and will not be included until the new layout has matured.

County Donegal has sufficient quality links golf to sustain a challenging weeks golf. It is remote and its links are on the Northern part of the Wild Atlantic way, a coastal driving route that is 1553 miles long.

The club is located at Fanad towards the north of County Donegal. It opened in 1891 and was a founder member of the Golfing Union of Ireland. The course was completely remodelled by Pat Ruddy in 2000. There were 9 new holes and four holes updated. This extended the yardage from 6000 to over 7000 yards.

The setting of the course is quite breathtaking. It is situated below the Knockalla mountains and runs along the superb golden sands of the highly acclaimed Ballymastocker beach. The beach was once voted second most beautiful in the world by the Observer Newspaper.

It is alongside the glittering waters of Lough Swilly, with the Inishowen Hills as a backdrop. No wonder the course is often referred to as "the links of heaven".

Portsalon is a magnificent test of golf with some quirky elements that will enthral and challenge any golfer. With roots in the 19th century, its twentieth-century update has created a grand links today, in the most beautiful terrain imaginable.

The front nine runs nearest the strand while the back covers the higher ground. The course runs clockwise with OOB on the left of seven holes. The greens are well protected by bunkers, streams and natural sand dunes all coming into play.

Some greens are raised with runoffs whilst others are more gathering. The course is of a modest acreage and double greens are used at 3/9 and 4/8 helpfully creating more space as at St Andrew's. The dogleg left second hole known as Strand is memorable, it has been referred to as the best second hole in Ireland.

With your tee shot you cut as much as you dare from the dogleg. If you do not you will be unable to clear the river before the green. The next ten holes weave backwards and forwards through impressive dunes, some are very high. The rolling terrain and narrow fairways need very few bunkers.

There is a contrast between the holes through the dunes and the flattish holes where strategic placement is required rather than power. Play Portsalon once and you will be looking forward to repeating the experience.

Cruit Island (pronounced “Critch”) is typically the only 9 hole course in Ireland to make the top 100 rankings. Among Ireland’s many excellent 9 hole links there are several equally fine courses but how can you compete with a course that is “Wild, fun and crazy”.

It was created in 1986 by Michael Doherty the City of Derry Professional. Cruit island is a remote course, set above the wild and untamed Atlantic ocean on the very edge of Ireland. To reach it is dramatic before you start. The final several miles of the journey is a single-lane track, with minimal passing points.

The reward is to reach this incredibly picturesque and unspoilt part of the country.

The wild and windswept views and setting of these natural links make Cruit Island a special location. You have different panoramic views throughout your round so that you will regularly linger and enjoy the sights. Playing on the clifftops it is raw elemental golf, with the sound of Atlantic waves crashing on the rocks below.

The course is short, just 2809 yards for 9 holes with seven par fours and two par threes. The design is completely natural, simply conforming to the shape of the landscape as it was created.

There are dunes, huge boulders, humps and hollows and high dune grass. There are blind shots on five holes which are scary the first time around  as you puzzle over club selection and how to cope with the wind.

However, the new view that awaits you over the hill is some compensation. The putting surfaces when you reach the greens are fair and true.

The first four holes are through significant rolling dunes followed by three holes on the dramatic coastline. The 6th hole is a fantastic par three, all carry with both tee and green on peninsulas separated by a gorge.

Club selection can vary from a three wood to a pitching wedge depending upon the wind. Get it wrong and you may find the sea or the rocks.

Most of the holes are tricky, three, seven and nine are wild and they are all fun. The natural beauty of the links and its quirky design will make your visit a memorable golfing experience.

The course is also listed in the Golfer and Sportsman Holiday Guide 1897. The earliest record held by the club dates back to 11th July 1906 when the club was formed. There were less than 20 founder members and in the first 50 years membership never exceeded 30.

Dunfanaghy Golf Club is a true 18-hole links golf course. It was laid out in 1905 by Harry Vardon, six-time winner of the British Open. The course today is said to be very similar to the course laid out by Vardon and provides a reminder of what golf must have been like in those days.

Dunfanaghy Golf Course lies on the outskirts of picturesque Dunfanaghy village in County Donegal.  It is on the “Wild Atlantic Way” and 20 miles west of Letterkenny on the N56.

The course has spectacular views of Horn Head, Sheephaven Bay, Killahoey and nearby beaches, headlands, harbours and the dramatic Derryveagh and Muckish Mountain. As a true links course which is sand-based and free-draining it offers year-round golfing.

The course runs along a three-mile stretch of beach next to a beautiful lagoon on Sheephaven Bay. Dunfanaghy is easy walking but also offers a superb golfing challenge. It’s a lovely old links and typically is dependent on the wind as a major hazard.

Six holes have been reconstructed and some other minor alterations to the course have taken place but Vardon's design is still the basis of the course. The greens are consistently highly rated among the best in Ireland.

The links does not have a lot of bunkers, but there is out of bounds all along the front nine and much of the back nine. The key to a good score can be to avoid bringing a slice.

The first six holes for example have out-of-bounds an ever-present threat on the right hand side. The sixth is stroke index 1, a long par-4 featuring a tricky approach to an elevated, narrow green. The seventh and ninth are tricky par threes needing careful club selection according to the wind.

The 198 yard par three 17th tee is elevated on the shoreline, the green has the beach behind and close to the right. The carry is over dune grass, a severe challenge to make the green. The long par five 16th is another severe challenge.

In his book “The Complete Golfer” Vardon ended - 'Another spring is breaking brightly and the golf that is before each of us promises to be as momentous and satisfying as any that has gone before us'.

The Club is a fine links course at Lisfannon on the Inishowen Peninsula and was one of the founder members of the Golfing Union of Ireland. The club was formed in 1891 and the course laid out by Charles Thompson the professional at Royal Portrush.

Lying on the shores of beautiful Lough Swilly (Lake of Shadows) and beneath the picturesque so-called Mouldy Mountain, the course has a wonderfully scenic setting. The ever-changing light patterns ensure that the backdrops are superb throughout the seasons.

Cecil Barcroft likened features of the links to the famous Old Course at St Andrews in Scotland. He was referring to similar concealed runs, bumps and pot bunkers approaching the greens that look easy enough to run onto.

The course is bordered by Lisfannon beach. The terrain is generally flat but the holes are varied with many sandy knolls and undulating lies and the greens are top class with true fescue grass.

Many hazards and problems are not visible from the tee boxes so careful shot selection is important and your driver may not always be the club of choice. The fairways are fast running with strategically placed rivetted bunkering throughout the course.

The club has battled against coastal erosion over the years which was limiting the size of the course. Huge rocks have now being placed along the shoreline to keep the sea at bay.

The exposed nature of the course means that you do not often have a calm day, add to that thick rough, tight fairways and steep bunkers you meet a considerable challenge.

The 345-yard par four  4th is a feature hole known as “Kinnegar”. It is a dogleg right that temps you to cut the corner but needs a good shot to make the fairway.

A lateral water hazard runs alongside the fairway to the right side of the green. The 16th is just 93 yards and known as “Fairy”, from a raised tee the green is partly blind and undulating.

It is protected by a stream, pot bunkers, severe run off areas and thick rough. This classic links course provides a good challenge to golfers of different ability in a wonderful setting.

The Clubs first nine holes were designed in 1926 by Fr. Danny Molloy, mainly on Commonage land and some privately owned fields. The club has faced some challenging times and It seems did not function from 1939 until it was resurrected in 1960.

It was redesigned by the prolific Irish golf course designer Eddie Hackett. The club has ambitions to expand to 18 holes. In 2014 an imaginative revamping to the links layout was carried out and now there are 14 holes. This has developed the course into one of the most natural and picturesque links courses in the county.

The club is deep in the heart of the West Donegal Gaeltacht (Irish speaking area) and they say “visitors will receive a “Ceád Míle Fáilte” which translates to a hundred thousand welcomes.

The unique and picturesque course is carved out of the natural landscape and it lies next to some of Ireland’s most attractive and unspoilt beaches. Panoramic views from parts of the course are splendid; some holes overlook the Atlantic Ocean and offshore islands with Mount Errigal in the background. Gweedore is secluded in an unspoilt part of Ireland.

The ocean nearby has a number of quaint and mysterious islands including Gola, Umfin and Bo. It is an ideal location for a relaxing golf break.

The course terrain is rugged and undulating and nature plays a large role in the design of this course. Gweedore may initially look easy but is quite deceptive with a tight layout that makes it difficult to score well.

There are tough par threes and a very tough par five. This is an entertaining yet challenging course and fair to golfers of varying skills. The clubhouse is charming and provides full catering in the summer months.