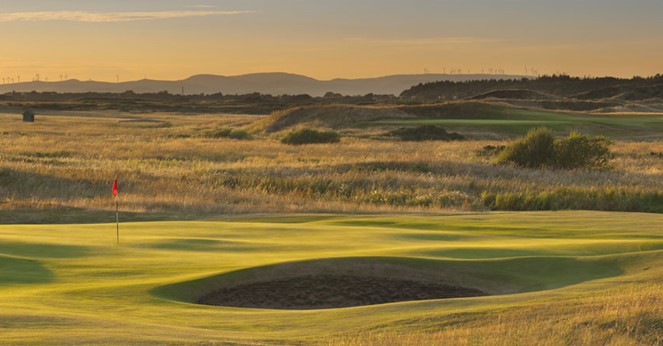 Scotland provides a range of first class golf tours  to suit local and international golfers. This blog identifies two island clubs that are still close to the simple layout created by early professionals Tom Morris and Willie Park Junior. Another little known course is visited sometimes simply to play a par 3 which some say is the most dramatic in Scotland. Our other choices are well known but we believe that all five are unique experiences that you can only get in Scotland.

Askernish Golf Club has been referred to as  “the most natural golf course in the world”. It is located on South Uist an Island in the Outer Hebrides. The course and club has a long and somewhat story book history. Old Tom Morris came to South Uist in 1891 to create a course at the request of the wealthy land owner. He created an 18 hole course that was maintained by the local crofters until the early 1920s. During the next 80 years the course existed at times but then reverted to the wild. In 2005 a group of locals decided that they wanted their course back and volunteers set to work with the help of golf architect Martin Egbert restoring this ’lost’ course. In 2008 the course was reopened as an 18 hole facility that has received the highest acclaim, particularly from golfers who value undiluted raw links golf. This was 100 years after Old Tom died. The course was restored in the manner of early links where golfers followed the lay of the land and greenkeepers refined the course gradually. Putting conditions were rudimentary and gradually improved  by levelling and conditioning. It is a great unique layout in a spectacular location where you step back in time. The opening holes give you a gentle start then from the 6th to 16th you move into the dunes and a sensational stretch of holes where each could be a signature hole. Imagination is needed to play these holes and the options are endless. The final two holes provide a more gentle finish. Askernish is remote and it takes some effort to get there. If you love the history of golf it is a must play. The Askernish Open is held in August each year.

Prestwick Golf Club is unique as the birthplace of the Open, the major championship in golf. A simple stone cairn near Prestwick’s clubhouse marks the spot where the first Open Championship tee shot was struck in 1860. The tournament had been arranged following the death of Alan Robertson of St Andrews in 1859. Robertson was one of the first golf professionals to make a living from golf and was considered the best golfer at the time.

The members of Prestwick agreed to hold a competition to decide the next Champion Golfer on their course laid out by Tom Morris. The first Open Championships was held at Prestwick on October 17, 1860. Eight professions competed for a red leather belt with silver clasps and an ornamental silver buckle. It was won by Willie Park of Musselburgh who recorded a score of 174 for 36 holes (three rounds of 12 holes) bettering Old Tom’s score by two strokes.

Old Tom went on to win the championship four times, as did his son Tommy who secured three consecutive wins and ownership of the leather belt. He went on to record the Championship’s first hole in one and a modern-day albatross on Prestwick’s 578-yard opening hole. The original scorecards on which these achievements are noted are among the most treasured items in Prestwick’s archive collection. Prestwick presided over the first 12 Open Championships and went on to host 24 Open Championships with the last being held in 1925.

Jubilee course – Considered to be the most challenging in St Andrews. 6742, par 72

Castle course – Set on a clifftop with spectacular views over St Andrews. 6759, par 72

Eden course – Designed by the exceptional golf architect Harry Colt, it is a layout full of character. 6250, par 70

Royal Tarlair is on the North East coast of Scotland in the town of Macduff. It is a cliff top parkland course which is known for its signature par 3, 13th hole “The Clivet”. This exhilarating hole is often referred to as the most dramatic hole in Scotland. Golfers visit just to play this par three. It is 152 yards off  the edge of a rocky precipice across the sea to a tiny green on a rocky ocean outcrop. It can play anything from a wedge to a wood and offers the golfer the opportunity to test their nerve and resolve to the limit.  It is a challenge that you will remember for years to come.

Shiskine Golf course is on the West coast of the Isle of Arran which is often referred to as ” Scotland in Miniature”. This 12 hole course is wild, unspoilt, quirky and fun with a cult following. Historically it was founded in 1896 and has been 9 holes and 18 holes.  During the first world war 6 moorland holes were abandoned leaving the current 12. It is natural linksland barely touched by man, a shrine to how the game was played by the early golfing greats. Only 2996 yards in length with seven of the holes par 3, it is like no other course. Most shots are blind and you need the detailed instruction guide to pick your way around the first time. The location is stunning with views across Kilbrannon Sound to the Kintyre peninsula. The most famous and exciting holes are the 3rd Crow’s Nest and 4th Shelf which lie beneath Drumodoon Cliffs. A round may only take 2 hours so if you can play it twice. Then you should enjoy the layout and its quirks and see it as a sound and varied golfing test.