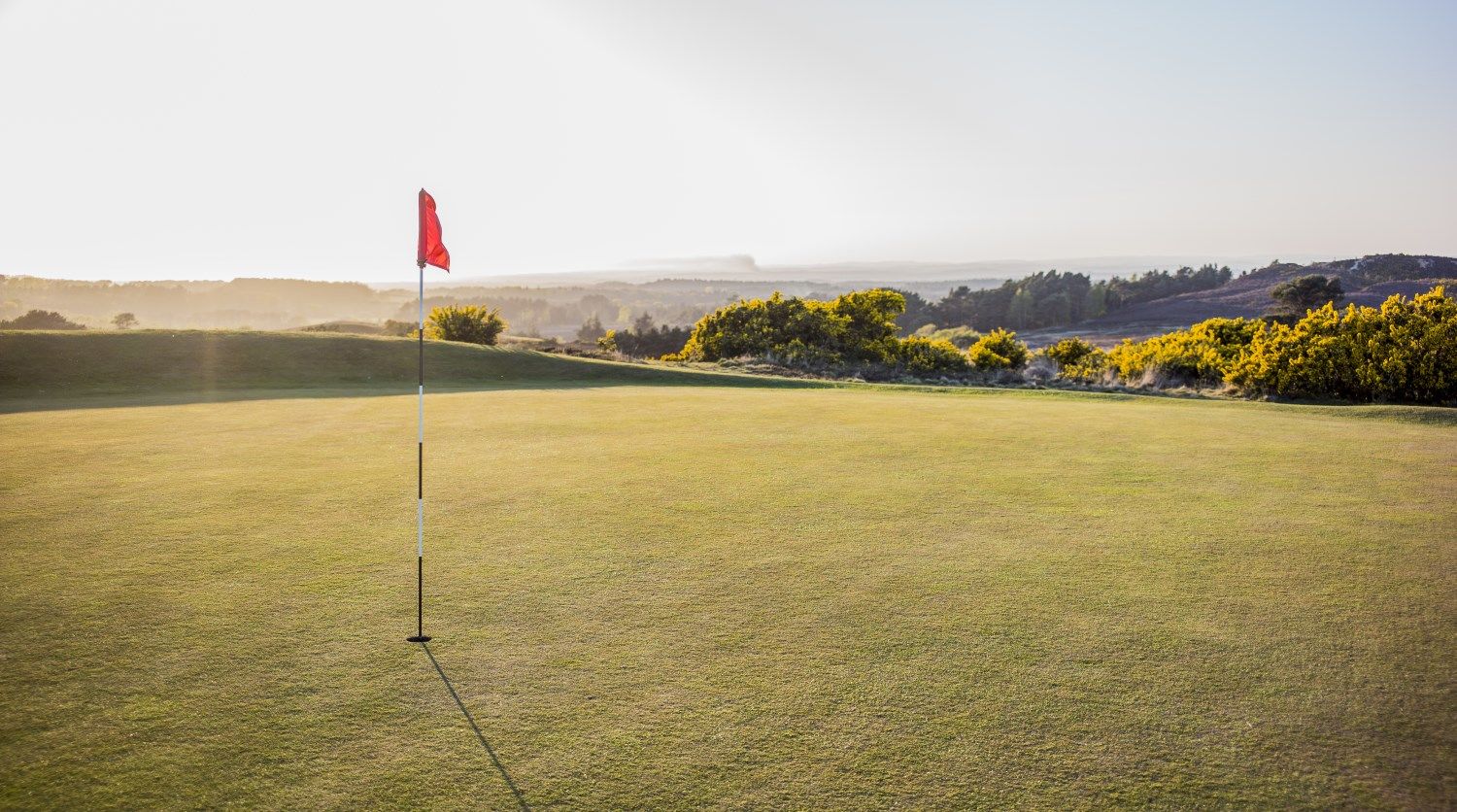 This Trail takes you to five genuine Harry Colt courses in South West England. There is an interesting mix of five courses with one seaside links, two are heathland, and two are downland. For accommodation we have selected a hotel in the famous City of Bath and one in the splendid seaside resort Bournemouth.

Bath Golf Club is high up on Bathampton Down with panoramic views over the Georgian City. The course is not long but some of holes require careful thought and clubbing. Wind can be a factor and it's a real thinker's course.There are undulating but generous fairways, the greens present a challenge being quite small with tricky borrows.The course is full of variety with panoramic views. The Westbury White Horse is visible and an old quarry on the 14th has been cleverly incorporated it into the design of the hole.

Bath was founded in 1880; in 1921 the club bought the freehold for £4000. The Club engaged Harry Colt for £600 in 1937 to redesign the course including building the current 10th and 11th holes. Colt was educated near Bath Golf Club at Monkton Combe School where he excelled at cricket, rugby and rowing. His layout has largely remained to the present day. Bath Golf Club is proud of their association with the great Harry Colt; his courses have stood the test of time. His design t Bath stands today as one of his very best.

Burnham and Berrow championship course is a long-established seaside links. It starts at a lively pace and scarcely lets up until you reach the historic old clubhouse where you are able to wind down and contemplate. The front nine follow the sand dunes and coastline to the north, and then turn inland following the coast road through Berrow, past the Church and back into Burnham. As with all links golf the difficulty is the wind and its fickleness, which means that the course can play in a different way day to day. The greens are quick and true and the course is kept in good condition throughout the year. (6793 yard, par 71)

Burnham Golf Club was established as a nine hole course in 1891. In 1896 members wanted to extend the course to Berrow Church. The Lord of the Manor insisted that the name would then have to include Berrow. The club therefore became Burnham & Berrow Golf Club. In 1913 Harry Colt was commissioned to redesign the course. His challenging layout is essentially as it is today. He redesigned the 1st, 2nd, 4th, 5th, 9th, 10th, 16th and 17th holes, eliminating the weak holes. It has hosted over 40 major Men’s and Ladies’ Amateur Championships.

Blackmore is a heathland course with heather lined fairways intermingled with pine, birch and oak trees. There are many clever dog-legs and accuracy of drive is important as each hole needs to be played strategically. The course is noted for the quality of its greens which are quick with many subtle borrows. It is short but a relentless test of golf maintaining your interest from start to finish. There are five par 3s with raised greens, all well-guarded by bunkers. The most testing is the 15th, a brutal hole at 200 yards. It is often into the wind and has an upturned saucer green. 6164 yards Par 69.

Blackmore is at the western end of the sand belt that runs through Surrey, Berkshire and Hampshire providing fantastic heathland. Harry Colt originally laid out a 12 hole course that opened in 1913. Expansion to 18 holes was delayed by World War 1; Colt finished his work in 1924 laying out two loops. Blackmoor has matured over the past 100 years into one of the best courses in Hampshire. Colt’s design principles have stood the test of time as golf is still played over sixteen holes designed by him. Colt’s maxim was: “The real test of a course: is it going to live”, Blackmoor certainly has.

Tidworth celebrated its centenary in 2008 and is often described as Wiltshire’s ‘Hidden Gem’. It is undulating downland with springy turf and mature trees lining the fairways. There are splendid views across Salisbury plain and Tedworth Vale. Colt was at his best with each hole different and a strategic challenge. As you would expect his four par threes are excellent particularly the 5th and 17th. The wind often blows creating variable conditions each time you play. There are only two par fives and the course is therefore Par 70 and 6320 yards.

Tidworth Garrison Golf Club is now a private members club but originally it belonged to a military garrison. The construction of Tidworth Garrison took place between 1900 and 1910. There were requirements for sporting facilities and a golf course for the use of officers was requested. The club was founded in 1908 with a 9 hole course. Detailed knowledge of the history of the early years of the Club is limited as transient officers acted as Honorary Secretary. The course was extended to 18 holes between 1919 and 1921. Harry Colt is attributed as being the original designer of the 18 hole course.

Broadstone is one of the best natural heathland golf courses in the South of England. There are 250 acres of rolling terrain where the fairways flow independently through exceptional natural heathland with plentiful heather, gorse, pine, birch and rhododendrons. The elevated homeward nine has wonderful views of Purbrook Hills and Poole Harbour. The club was founded in 1898 and the layout is quite challenging with great diversity, outstanding scenery and scarcely a weak hole. 6419 yards, Par 70.

In 1914 Harry Colt was employed by Broadstone Golf Club to re-develop their course. At this time the layout was part parkland and part heathland. The plan was to lay out new holes from the 5th tee to the 16th green. This eliminated the parkland and created a complete natural heathland design. World War 1 delayed the work and in 1920 the course re-opened. Harry Colt applied his principles to this beautiful heathland and it remains today very much as he completed the course. Bernard Darwin the golf writer described Broadstone as “the Gleneagles of the South” and added that it was “one of those spots clearly designed by providence as a golf course”.

The club was founded in 1892 and modified by Harry Colt around 1900. It is positioned on a high plateau set in a heathland nature reserve. With 360 degrees of panoramic views the scenery is often quoted as the best in the British Isles. The course is challenging with abundant heather and gorse to avoid, particularly as it is fully exposed to the winds. There are four thought-provoking par three’s and four long par fours. The views from the 5th tee which is elevated must make it one of the outstanding scenic tee-shots in the U.K.

Harry Colt must have been delighted with this expansive heathland allowing him to apply his design skills and principles. He would have exploited the panorama. You can see the Solent and the Isle of Wight to the south. Look east over Poole Bay and Bournemouth. Brownsea Island and Poole Harbour are to the north and west is the Purbeck Hills. The course was owned at one time by the well-known and admired author Enid Blyton who wrote numerous children’s books and her husband Dr. Darrell-Waters. 6295 yards Par 70. For more information there is a book “100 years of golf on the Isle of Purbeck” which was produced for their centenary.