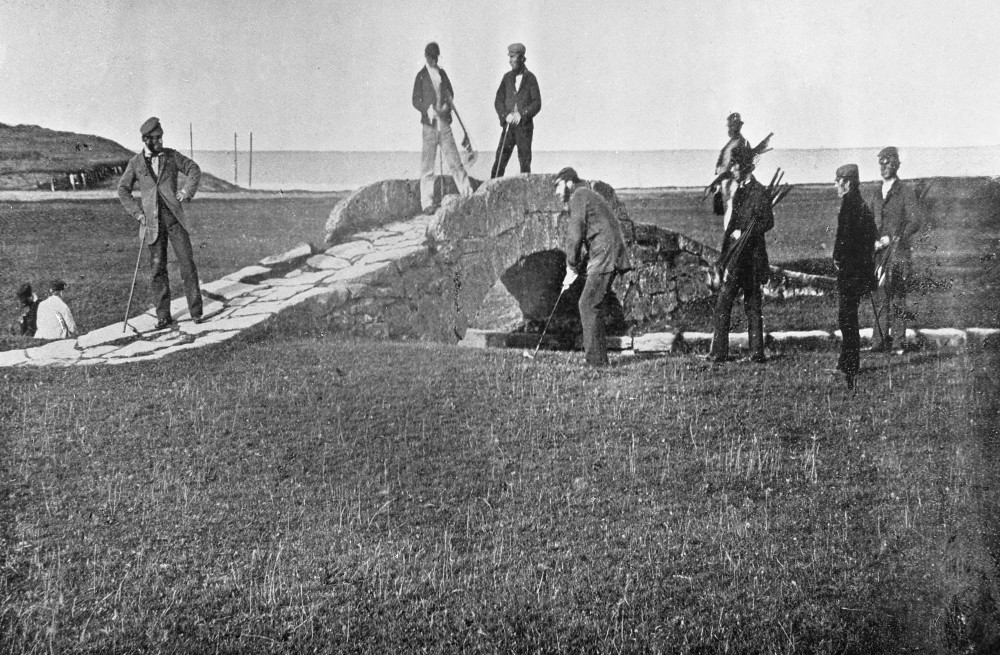 Golf History: Who Were The Robertson Family?

In the early 19th century golf was played with handcrafted clubs and balls that were expensive and not long-lasting. Consequently, the game was mainly played by the nobility and wealthy gentlemen. At this time professionals could make a living by ball and club making, instruction, caddying and playing for bets.

The Robertson family was involved in the game of golf from 1610. Agnes the daughter of Thomas Buddo, a ball maker in St. Andrews, married David Robertson. From this marriage, the family continued the ball making trade through to the mid-19th century when Alan Robertson was a ball maker and Scotland’s champion golfer.

Not much is recorded about Alan Robertson’s grandfather Peter. He was a caddie at St Andrews and a huge fan of golf. Those that did tell his story described him as a professional golfer. Alan’s father was senior caddie serving the Royal and Ancient golf club; he was also a skilled feathery ballmaker, as was his father.

Alan Robertson was born in 1815 in St Andrews and followed in the family tradition as a ball maker. He developed an outstanding reputation due to his skilled craftsmanship coupled with his exceptional talent as a golfer.

Alan’s brother David emigrated to Australia and became one of the founders of the Australian Golf Society. The society was later the ruling body for golf in the region. When Alan was Captain of the St Andrews Golf Club in1854 David sent him 2 gold nuggets as prizes for the members to compete for.

Alan Robertson the golfer is remembered for many things. Perhaps his greatest achievement was in 1858 when he became the first man to break 80 on the Old Course. He was prominent as a member of the St Andrews Golf Club which was the second club to use the course. He proposed the first handicap system at the club to make its competitions fair to all members. Many describe him as the first professional golfer; he was certainly the best golfer of his generation and was mentor to the great Tom Morris.

He was not professional to the Royal and Ancient golf club but he controlled the caddies and play on the links. The R & A used him at times to keep the greens and course in order. He perfected the ‘bump and run’ shot to the greens and was a skilful iron player generally. He wore a red coat when playing and his friendly way endeared him to all golfers, the members and the townsfolk. He would help anyone who shared his love of golf.

There are many stories about his matches and unorthodox tactics to win a match. A golf game between Willie Dunn Snr. of Musselburgh and Alan Robertson is famous. It was 20 rounds of golf over 10 days, 2 rounds per day. Alan won the contest with “two rounds up, one to play” in 1843. Folklore at St Andrew's was that Robertson never lost when playing as an individual for money. For many years Alan Robertson and Tom Morris had a lucrative playing partnership.

Robertson's first golf course design, assisted by Tom Morris, was at Carnoustie in 1842. Tom Morris would extend the course to 18 holes in 1857 Robertson also significantly improved the Old Course by enlarging its greens, to allow for the increase in golf popularity.

When he died quite young in 1859 he was the champion golfer of Scotland, Prestwick Golf Club arranged a competition in 1860, to decide on a successor.  This was the forerunner to ‘The Open’, which has continued to be held annually except for war years. It is the longest-running golf championship.

Alan Robertson the ball maker. Robertson was considered the premier ball and club maker of his time, and even exported his merchandise. It was a profitable trade with an ever-growing demand. Originally reports noted that a ball maker would make 2 to 3 feathery balls a day. By 1838 it was estimated that an expert ballmaker could make 50 to 60 a week.

However, it was hard work and whether that rate could be sustained is questionable. A review of autopsy reports has indicated that it took its toll on ball makers. When the Gutty ball came into use Robertson fought against it, knowing that it threatened his business. Later he turned to make Gutty golf balls as they were popular. As they improved and were mass-produced they significantly helped the growth and development of golf but made production uneconomic for small businesses.

We run golf tours across all of Scotland that take in stunning scenery and alluring history.

Read our reviews and contact us today to book!