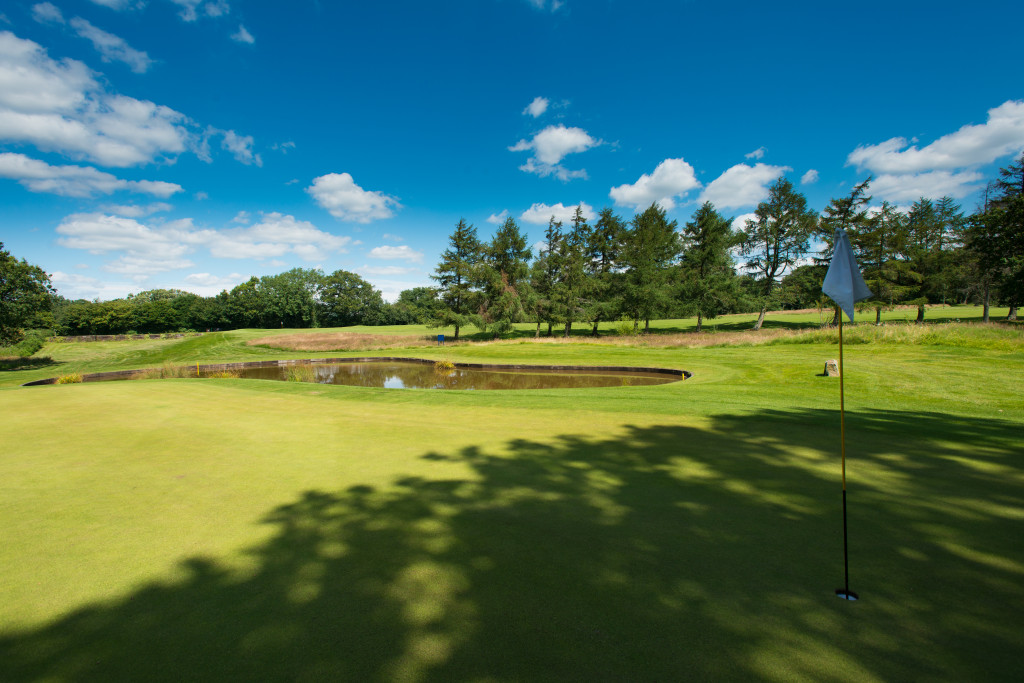 Our Best of Colt ‘top 10 selection’ are the courses that best represent Harry Colt’s design principles. They value his design, some after more than 100 years, and are keen on maintaining or sometimes restoring his design. This “Trail” takes you to five genuine Harry Colt courses. We have selected hotels at Bath, Southampton and Windsor. There is an interesting mix of courses. One links, two heathland and two parkland. Several of these courses would now be termed short. We have found that they are often the ones that have been able to keep close to Colt’s original design. Those selected to hold professional tournaments have more pressure to gain length which can compromise the original strategic design.

The course is 300 feet above sea level with fabulous views. The greens rank amongst the best putting surfaces in Wales. Three cross-bunkers on the 8th typify Colt's bunkering, the 'run-offs' on the greens reward the good approach and but penalize any poorly directed shot. Two outstanding holes are the long par four ninth, and the signature 12th with its unique banana shaped green. It is a relatively short hole but has card wrecking potential. Wales first ever professional tournament was held at Radyr in early 1904 and National Championships have often been held there. 6109 yards Par 70.

Harry Colt designed Radyr in 1912 and it has hardly changed since, although he advised on some changes in 1921. Radyr has been referred to as "One of Colt's Little Jewels". The club house was involved in both World Wars.  The local militia used it as a guard room in 1914 and an explosives store was built near the present 7th tee in 1918. The lady members excelled themselves in caring for injured soldiers in the club house. During the period 1940 to 1945 the War Office took over the clubhouse again for use by the Home Guard.  The 11th, 13th, 16th and 17th holes were taken over for agriculture and ploughed to grow wheat and potatoes.

Burnham and Berrow championship course is a long-established seaside links. It starts at a lively pace and scarcely lets up until you reach the historic old clubhouse where you are able to wind down and contemplate. The front nine follow the sand dunes and coastline to the north, and then turn inland following the coast road through Berrow, past the Church and back into Burnham. As with all links golf the difficulty is the wind and its fickleness, which means that the course can play in a different way day to day. The greens are quick and true and the course is kept in good condition throughout the year. (6793 yard, par 71)

Burnham Golf Club was established as a nine hole course in 1891. In 1896 members wanted to extend the course to Berrow Church. The Lord of the Manor insisted that the name would then have to include Berrow. The club therefore became Burnham & Berrow Golf Club. In 1913 Harry Colt was commissioned to redesign the course. His challenging layout is essentially as it is today. He redesigned the 1st, 2nd, 4th, 5th, 9th, 10th, 16th and 17th holes, eliminating the weak holes. It has hosted over 40 major Men’s and Ladies’ Amateur Championships,

Broadstone is one of the best natural heathland golf courses in the South of England. There are 250 acres of rolling terrain where the fairways flow independently through exceptional natural heathland with plentiful heather, gorse, pine, birch and rhododendrons. The elevated homeward nine has wonderful views of Purbrook Hills and Poole Harbour. The club was founded in 1898 and the layout is quite challenging with great diversity, outstanding scenery and scarcely a weak hole. 6419 yards, Par 70.

In 1914 Harry Colt was employed by Broadstone Golf Club to re-develop their course. At this time the layout was part parkland and part heathland. The plan was to lay out new holes from the 5th tee to the 16th green. This would eliminate the parkland area and create a complete natural heathland design. World War 1 delayed the work and it was not until 1920 that the course re-opened. Harry Colt applied his principles to this beautiful heathland and it remains today very much as he completed the course. Bernard Darwin the golf writer once described Broadstone as “the Gleneagles of the South” and added that it was “one of those spots clearly designed by providence as a golf course”.

Blackmore is a heathland course with heather lined fairways intermingled with pine, birch and oak trees. There are many clever dog-legs and accuracy of drive is important as each hole needs to be played strategically. The course is noted for the quality of its greens which are quick with many subtle borrows. It is short but a relentless test of golf maintaining your interest from start to finish. There are five par 3s with raised greens, all well-guarded by bunkers. The most testing is the 15th, a brutal hole at 200 yards. It is often into the wind and has an upturned saucer green. 6164 yards Par 69.

Blackmore is at the western end of the sand belt that runs through Surrey, Berkshire and Hampshire providing fantastic heathland. Harry Colt originally laid out a 12 hole course that opened in 1913. Expansion to 18 holes was delayed by World War 1. Colt finished his work in 1924 laying out two loops, the front nine being the outer loop and the back nine the inner loop. Blackmoor has matured over the past 100 years into one of the best courses in Hampshire. Colt’s design principles have stood the test of time as golf is still played over sixteen holes designed by him. Colt’s maxim was: “The real test of a course: is it going to live”, Blackmoor certainly has.

Thornton Park is one of Harry Colt’s high quality courses at Brentwood. It is a wonderful woodland setting with prolific oaks, elms and cedar lining many fairways. On many holes it feels as if you have the course to yourself. The turf is lush and springy and the land drains well so tees and greens are normally open all year round. The fairways give the impression that it will suit long hitters but it is still difficult to score well. There are many tricky holes and well-guarded greens. The greens are hard, quick and true. Many players favourite is the par four scenic third hole that opens with a drive over the lake. 6511 yards Par 71.

Harry Colt was engaged in 1919 to design Thornton Park Golf Course in 240 acres of Thornton Hall. This ideal site was formally an ancient deer park and in the 18th century. Capability Brown the famous landscape architect had designed the park. Colt laid out the course on mature parkland with hundreds of trees and smooth slopes. The land was gently undulating with a five acre lake that was linked by a stream in a small valley to two ponds. The Palladian Mansion Thornton Hall was originally leased as a clubhouse and is still magnificent backdrop to the final hole. It has been sensitively lengthened over the years.