YOUR ITINERARY AT A GLANCE

Arrive at Belfast / Dublin Airport. Met by AGS representative who will be your private driver/guide for your entire trip.

Me and Mrs Jones is the North Coast’s only authentic boutique, luxury, lifestyle hotel. The most unique and attractive in its area, the quirky-modern hotel decor has been carefully chosen and boasts a sense of space and opulence throughout.All rooms are over-sized with king beds, flat screen TVs, tables, expansive window walls, plus free-standing bath-tubs and individual shower-rooms for that extra mile of luxury. Within walking distance is the recent host of the Irish Open – Portstewart Golf Club and in the sister town of Portrush you can find the world-famous Royal Portrush. 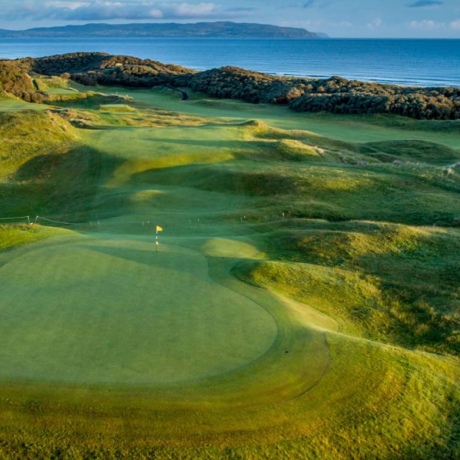 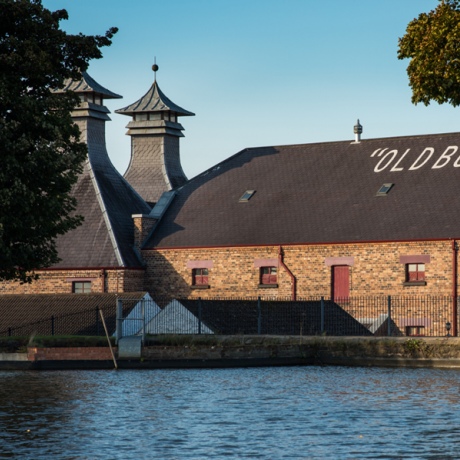 Portstewart G.C. This course originally known mainly for the spectacular first hole has had a major reshaping which led to a rapid rise up the rankings. It is situated on the Causeway coast between Portrush and Coleraine. 18 holes, 6784 yards, par 72.

“The Bushmills distillery has had its fair share of visitors these past few hundred years, now over 120,000 each year (and that’s not counting our resident ghost, The Grey Lady). And of all the living souls I have encountered, every one of them leaves with a smile on their face and a spring in their step, mind you, that might just be from the fumes as we hand craft our Bushmills. Own a piece of bushmills history and even create your own personalised bottle, before settling back for a snack or light lunch in our restaurant.” 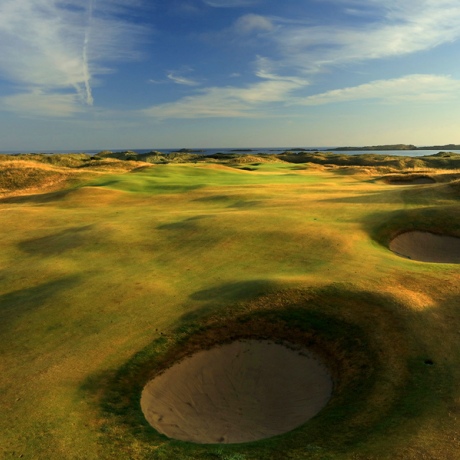 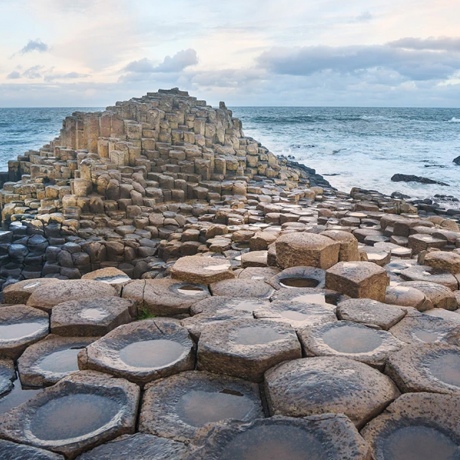 Royal Portrush G.C. Founded in 1888, this is the only club in Ireland to have staged a British Open Championship. It is a difficult driving course, the greens are large, the bunkers deep and the views exceptional. Royal Portrush is certainly beautiful and it has one of the most dramatic entrances to any golf course. As you wind your way towards the course along the coastal road, the crumpled, undulating links land suddenly appears in front of you, flags fluttering in the breeze. 18 holes, 6818 yards, par 72.

The Giant's Causeway lies at the foot of the basalt cliffs along the sea coast on the edge of the Antrim plateau in Northern Ireland. It is made up of some 40,000 massive black basalt columns sticking out of the sea. The dramatic sight has inspired legends of giants striding over the sea to Scotland. Geological studies of these formations over the last 300 years have greatly contributed to the development of the earth sciences, and show that this striking landscape was caused by volcanic activity during the Tertiary, some 50–60 million years ago. 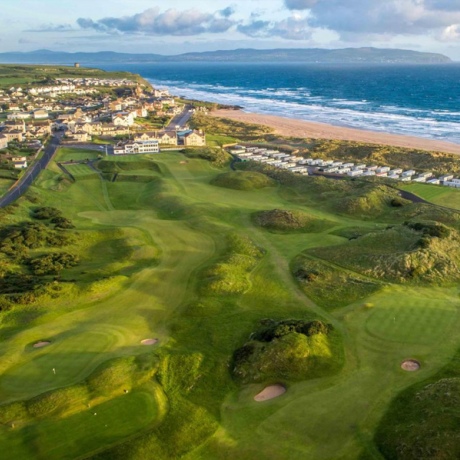 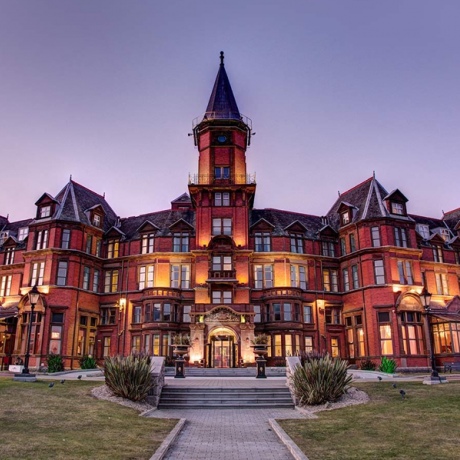 Castlerock Golf Club is a classic links course set amid the towering dunes on the North Coast of Ireland. Situated on the causeway coast it not only boasts some stunning views down the coastline but proves a great test of traditional links golf. The club formed in 1901 boasts two golf courses onsite, The Mussenden Course and The Bann Course. The course designed by legendary club maker Ben Sayers and Harry Colt is a great test of golf to golfers of any level. To the testament of the course it has held many National Championships both Amateur and Professional through the years.. 18 holes, 6499 yards, par 73.


After golf travel to Newcastle.

Stay 3 nights at The Slieve Donard Resort and Spa.

Nestling at the foot of the Mountains of Mourne, the Slieve Donard Resort and Spa stands in six acres of immaculate private grounds. A golden strand of beach borders one side while the mighty Royal County Down Golf Links frames the other. This lovingly maintained Victorian hotel is now home to one of Europe’s finest resort Spas and is equally suited to a short break, residential conference or even grander events. The hotel boasts 180 luxurious bedrooms, including Executive and Resort rooms and six magnificent Suites, many of which have stunning panoramic views over the Mountains of Mourne and County Down Coastline. All bedrooms are finished in tasteful, traditional styles with every modern comfort, including our famous King Koil 'cloud beds'. Add this to the Spa facilities and proximity to one of the world’s finest golf courses and you have a holiday destination or conference centre capable of proudly taking the stage with the world’s best resorts. 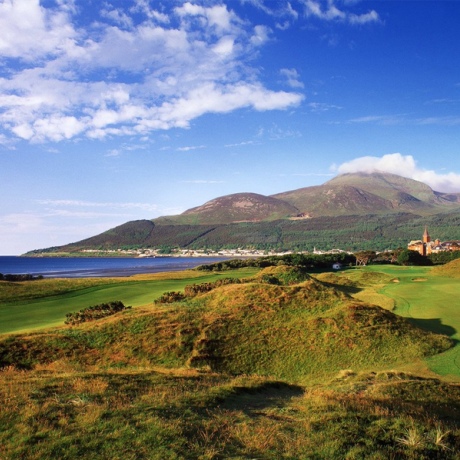 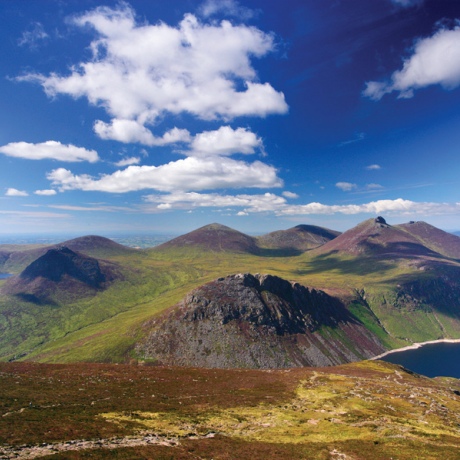 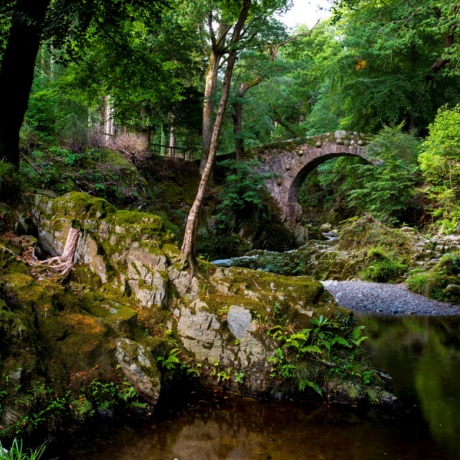 Royal County Down G.C. A natural links course, often ranked #1 in The British Isles, it is a tough course to play in the wind with narrow fairways, many small slick greens and dunes and gorse providing many hazards. Royal County Down is located in one of the world’s most naturally beautiful links settings in the Murlough Nature Reserve. Against the magnificent backdrop of the Mountains of Mourne, the links stretches along the shores of Dundrum Bay, zigzagging back and forth to provide a different vista from virtually every hole. As of 2020, all groups playing the Championship course must have a forecaddie with each game as a minimum caddie requirement.18 holes, 6692 yards, par 71.

The Mournes stand true to the words of songwriter Percy French as the place ‘where the Mountains of Mourne sweep down to the sea’. They are not only one of Ireland’s most scenic areas and an Area of Outstanding Natural Beauty (AONB), they are quite simply an adventurer’s paradise. One man felt the magic of the Mournes more than most. For Belfast-born Clive Staples Lewis, or CS Lewis as we know him better, the Mournes were a pleasure ground. The author was reared on the clean Mourne air, while his mind was inspired by these surroundings to create the world of Narnia from his masterpiece The Lion, The Witch and The Wardrobe.

Covering an area of almost 630 hectares at the foot of the Mourne mountains, Tollymore Forest Park has panoramic views of the surrounding mountains and the sea at Newcastle. It's open to the public all year. Oak wood from Tollymore was the preferred material for the interiors of the White Star liners including the 'Titanic' which was built in Belfast. A magnificent avenue of Deodar cedars is a striking feature of the entrance to this forest park in the foothills of the Mourne Mountains. 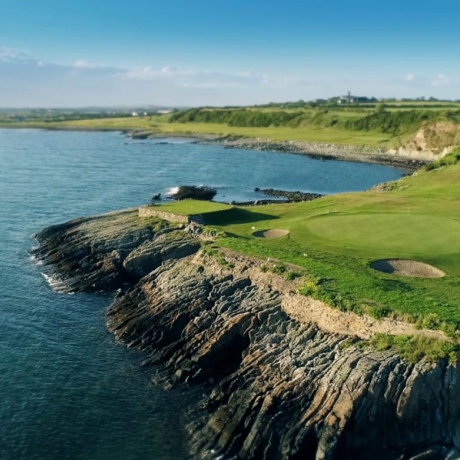 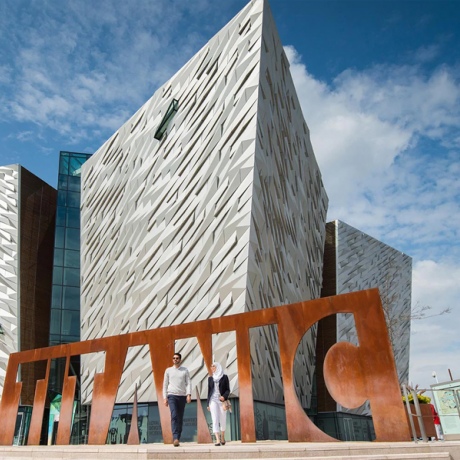 Ardglass G.C. Meandering along cliff tops, an excellent course, suited to all categories of golfers and as an added bonus, spectacular views across the Irish Sea from every hole. Ardglass Golf Club is well known for extending a warm welcome to its visitors who come from all parts of the world. Many of them make a point of playing Ardglass while visiting Royal County Down at Newcastle or Royal Portrush on the North Coast. At the clubhouse, parts of which date back to the 13th century, we have a fully stocked Pro-shop, an excellent restaurant, and of course Guinness on tap, as well as numerous other beverages for you to enjoy! 18 holes, 6012 yards, par 70.

The Titanic Belfast visitor attraction extends over nine galleries, with multiple dimensions to the exhibition. Drawing together special effects, dark rides, full-scale reconstructions and innovative interactive features you will explore the Titanic story in a fresh and insightful way from her conception in Belfast in the early 1900s, through her construction and launch, to her infamous maiden voyage and catastrophic demise. The journey goes beyond the aftermath of the sinking, to the discovery of the wreck and continues into the present day in the Ocean Exploration Centre.

You will be driven by an experienced and fully qualified driver.
The driver will meet you at the airport.

with any trip questions or additionalinfo we can customise this trip further to suit your requirements.