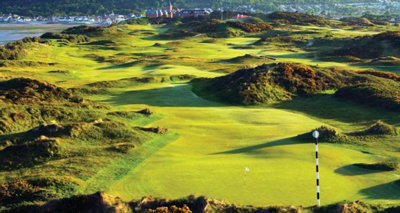 The Newcastle course is to host the open for the first time in 75 years!

Royal County Down has made outstanding contributions to Irish golf from the Club’s beginnings, hosting many important tournaments, starting soon after it opened, and continuing to the present day. Notably, the Club in 2007 became just the second Irish venue, after Portmarnock, to host the Walker Cup. The Irish Open on the European Tour is scheduled for late May in 2015, returning to Royal County Down after 76 years. It previously hosted the event three times, all prior to World War II.

The first course at County Down was built by Old Tom Morris, hired for the sum of four guineas to build a championship course at Newcastle, which opened in 1889. His course started and finished by the railway station; thus it played through the general area which the Slieve Donard Hotel now occupies. Many of the holes were on the grounds that the present-day Championship and Annesley courses at County Down occupy. George Combe began the remodelling of the course in 1900, and was Convenor of the Green from 1900 to 1913. He was made an honorary life member in 1909 and continued making improvements to the course. Harry Vardon modified the course in 1908, the same year King Edward VII bestowed royal patronage on the club. In 1926, the Club brought Harry Colt in to make further improvements.

Now is the time to book your golf trip or golf vacation to Ireland to see the Irish open, or maybe play this outstanding course. But hurry…. hotel places will fill up quick and you will need to book early.

Take a look at an example tour to Ireland, including Royal County Down here.